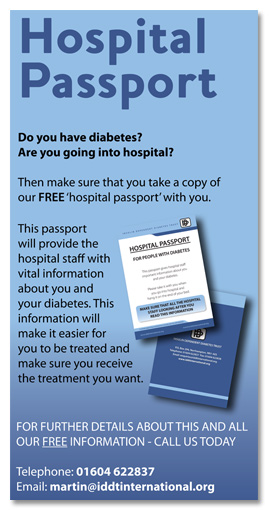 We hope that people with diabetes will be able to take the opportunity of using the Hospital Passport whenever they are admitted to Hospital and that health professionals will give them to their patients.

IDDT receives many calls from people who have experienced difficulties while in hospital. The reasons for this are numerous but often it can be the change in mealtimes, restricted access to medication and food as well as the general stress of being unwell and away from their family and friends.

The latest National Diabetes Inpatient Audit [NaDIA] report published on May 17th 2012 shows that nearly one in three hospital patients with diabetes are affected by medication errors. This is a small improvement on last year. The audit examined bedside data for 12,800 patients and 6600 patient questionnaires, covering subjects including medication errors and patient harm over a seven day period in October 2011. It involved 11,900 patients in 212 English hospitals and 900 patients in 18 Welsh hospitals.

These figures highlight the need for greater support for people when they are admitted to hospital. The Hospital Passport provides essential information for hospital staff and will help them treat the patient immediately and effectively, minimising any further harm.

For copies of the FREE Hospital Passport e-mail martin@iddtinternational.org or phone IDDT on 01604 622837 or write to IDDT, PO Box 294, Northampton NN1 4XS.

We’re recruiting for a Charity Data Coordinator to join the team in Northampton. Please click here for more information and to apply.