MBE Is Bolt From The Blue For Charity Chair 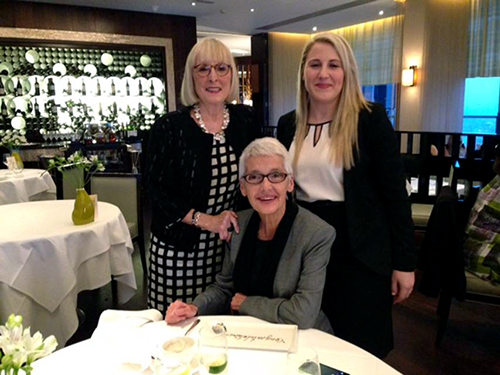 Jenny Hirst, co-chair and co-founder of the charity InDependent Diabetes Trust (IDDT) has run the very successful charity for over 20 years, was presented with an MBE by Prince Charles at Buckingham Palace.

Jenny successfully fought a ten-year battle against the pharmaceutical industry when she campaigned for the continuation of animal insulin following moves to switch people to genetically engineered insulin, which caused adverse reactions to thousands with the condition. The sustained lobbying led to government intervention and people with diabetes can still use animal insulin today.

Jenny attended an investiture ceremony at Buckingham Palace on November 21st 2014 with granddaughter Amelia Hirst and IDDT trustee Veronica Readman. She said: “I am not one for personal accolades so I accepted the MBE on behalf of the charity and all of those who fought tirelessly in the name of people with diabetes to ensure the continuation of animal insulin.”

The award recognises the contribution Jenny has made to charity and public health, having worked tirelessly for people with diabetes since her daughter was diagnosed with type 1 diabetes almost 40 years ago, first as a trustee for the British Diabetic Association (now Diabetes UK) and then for IDDT.

IDDT, an International charity, based in Northampton, has more than 35,000 members and works across the globe helping families and people with diabetes to manage their condition and live positive, healthy lives. The charity provides information booklets and other support, such as collecting unwanted insulin to help adults and children in developing countries who cannot afford the insulin they need for survival.