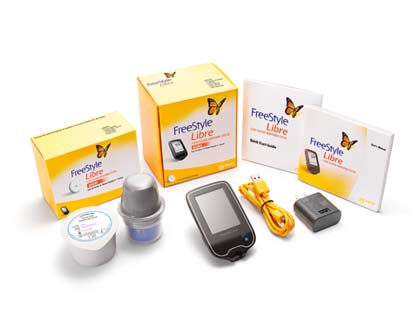 It will be available for reimbursement via the NHS in England and Wales, NHS Scotland and Health and Social Care in Northern Ireland for people with Type 1 and 2 diabetes who are treating their diabetes intensively with insulin.

The sensor is about the size of a £2 coin worn on the back of the arm for up to 14 days with a probe that goes just under the skin. The sensor is ‘flashed’ with a scanning device which gives the glucose readings as a graph of the levels for the previous 8 hours and an arrow showing if the glucose levels are going up or down.

It seems like the answer to a prayer and people in the UK who are already using it by paying for the sensors, are full of praise for it. However, while national approval for the device has been given, this is subject to local health authority approval. So once again we run the risk of having a postcode lottery of availability despite evidence that flash glucose monitoring can improve blood glucose levels, reduce time spent in hypo- and hyperglycaemia and enable people, reduce HbA1cs and potentially reduce complications, not to mention improving the quality of life.

Naturally, IDDT believes that everyone with Type 1 and Type 2 diabetes using insulin who wants to use this device, should be allowed to do so, but will this happen? How will local health authorities decide who can or cannot have it or will some areas simply have a blanket ban? Will they understand and think about all the benefits that it could have on daily living and quality of life?

Here are just a few thoughts but there are many other examples: