The Noctura 400 eye mask is an effective, non-surgical and non-invasive treatment for Diabetic Retinopathy and Diabetic Macular Oedema.
By Richard Kirk, CEO PolyPhotonix

It’s a scary thought that, according to IDF, diabetes affects around 382 million people worldwide and by 2035 is projected to increase to some 600 million. Diabetic retinopathy and macular oedema are both serious complications of diabetes which can impair vision and may lead to complete loss of vision.  After twenty years of diabetes, nearly all patients with Type I diabetes and >60% of patients with Type 2 diabetes will have some degree of retinopathy so it is a huge issue, nationally and globally.

Current treatments of pan-retinal photocoagulation (laser) or intraocular injections of anti-VEGF (Vascular endothelial growth factor) drugs are both invasive and uncomfortable for the patient, making them treatments of last resort. They are typically given at a late stage in the development of these eye complications when patients’ eyesight is already being threatened. They also have serious side effects. 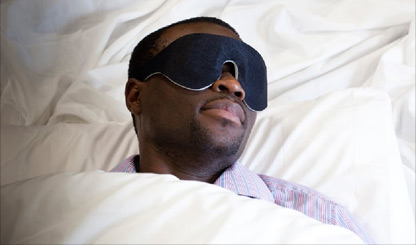 The Noctura 400 Sleep Mask, has the potential to revolutionise the treatment for diabetic retinopathy. It can be used at all stages through the progression of the disease and could also be used as a preventative treatment. It offers a home-based, non-surgical and non-invasive monitored therapy for people with diabetes who have these serious sight complications. It will significantly change the patient experience compared with current treatments.

The Facts
There is a growing body of research which has found that diseases such as diabetic retinopathy and macular oedema are driven, in part, by lack of oxygen to the retina (retinal hypoxia).  The retina uses more oxygen per unit mass than any other tissue in the body due to the fact that photoreceptors have a phenomenally high metabolic rate. That demand for oxygen becomes even greater at night, rising by around 40% as rod photoreceptors dark-adapt. In the healthy eye, this isn’t a problem as the eye provides just enough to get by.

People with diabetes commonly have microvascular damage, which can start to compromise retinal blood circulation and oxygen transport and once circulation is sufficiently compromised, the result is retinal hypoxia. The body’s natural response to this is to promote new growth of blood vessels to compensate by releasing VEGF but unfortunately these new vessels are weak and suffer from leakage of fluid which results in retinopathy and oedema.

Noctura 400 Sleep Mask
The Noctura 400 is a Sleep Mask which provides a non-invasive treatment for diabetic retinopathy, reducing the need for the invasive interventions mentioned above. It works on the principle of directing low intensity light of a specific wavelength into the rod cells during sleep. It restores the rods to their daytime state, reducing the need for oxygen and avoiding the hypoxic responses and therefore preventing the progression of retinopathy and macular oedema.

The Noctura 400 Sleep Mask consists of organic light-emitting diodes (OLED’s) housed inside a soft cushioned fabric mask, designed to be worn at night, to deliver a precise dose of light therapy during a patient’s normal hours of sleep. The mask is programmed to administer the correct dose of light each night as part of a continuing therapy and it also measures patient adherence.  At the end of the allocated period (usually 12 weeks), the mask is returned to the clinician for analysis and a replacement mask is provided. The collected adherence information allows the clinician to compare how regularly the mask has been worn, with changes in vision and the condition of the disease.

Availability
The Sleep Mask is currently available to patients privately through approved optometrists as well as through our national provider, The Outside Clinic, who provide a home optician service. It is anticipated that it will be adopted by the NHS in the future.

The Noctura 400 Sleep Mask has been developed by multi-award winning company PolyPhotonix, with a number of UK government and NHS funded research collaborations including Liverpool and Durham Universities. There are a number of clinical trials completed and a number still in progress; it is the data from these trials that has allowed the Noctura 400 to be awarded a CE mark.

On the Noctura website there are a number of patient testimonials included (also at: https://www.youtube.com/watch?v=eKTOvY28WG0 ) as well as an OCT scan from a patient who has used Noctura 400, showing the before and after scans (during a 6 month period) and the results are incredible.